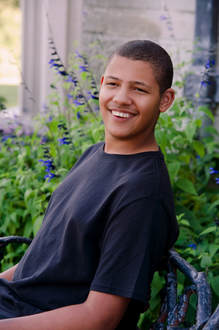 Mark and Patti McCloud were concerned when their 18 month-old son, Jordan, still hadn’t said his first words. After a series of evaluations, Jordan was diagnosed with autism at age two and a half.

Understandably, Mark and Patti were confused and overwhelmed. As they attempted to process their new path in life, medical professionals provided a list of things that Jordan would never do. Not ready to give up on her son, Patti responded, “How do you know?”

Now, more than 18 years later, she still thinks that way. Although Jordan is non-verbal and severely affected by autism, Patti can see him learning more every day. “He hears everything. He understands everything. I have no doubt in my mind.”

Jordan requires 24-hour care for even his most basic needs and can’t comprehend danger. Fortunately, he has a strong safety net surrounding him in the form of his parents, older sister, other family members, and his current and former teachers and support staff.

When he was five, Jordan’s pediatrician insisted that Pressley Ridge was the single-best option for in-home wrap-around services. Shortly thereafter, he also began participating in the extended school year program and weekly therapeutic social groups, where Patti formed a strong bond with the other parents. After Jordan’s high school closed in 2015, he began attending Pressley Ridge School for Autism full time.

Although Jordan is non-verbal, Patti says he is extremely social and loves being around others — especially other men, which is one reason that Patti appreciates Pressley Ridge. “Jordan is a man’s man. He responds well to males, and there are a lot of men on the staff at Pressley Ridge, which you don’t see a lot in this type of work.”

In general, Patti can’t say enough about the staff in the Autism program, who she says are knowledgeable, well-trained and caring. “The people here are touching lives and changing lives.”

“The people here are touching lives and changing lives.”

Though in the beginning Patti didn’t know anything about autism, since Jordan’s diagnosis, she and her family have become passionate advocates, both for the individuals and their parents. She chairs an annual fundraising event for and serves on the board of the local chapter of Autism Speaks, and in 2105, she was hired at Pressley Ridge as a Family Support Coordinator. In this position, she works to ensure that all aspects of our programming are engaging and friendly to the entire family. It was a perfect fit for Patti in more ways than one. She could use the experiences of her own family to benefit the families receiving services from Pressley Ridge. In addition, the position offered her the flexibility to put Jordan’s needs first. If he is having a bad day and can’t go to school, Patti can work from home to be able to care for him.

Most recently, Patti has been using her personal experience of exploring options for adult services to work with the team at Pressley Ridge School for Autism to design a program for adults who are “falling off the cliff,” as she puts it. At age 21, young adults with autism are no longer eligible for services through the education system.

Through the Adult Community Integration Program, Pressley Ridge hopes to provide a solution for at least a small number of those affected. Once fully up and running, the program will assist adults with autism in acquiring, maintaining and improving the self-help, domestic, socialization and adaptive skills necessary to reside successfully in home and community-based settings.

Jordan graduated from Pressley Ridge School for Autism in June 2017. With Pressley Ridge’s help, he transitioned to a day program at McGuire Memorial and continues to utilize Direct Support workers in his home and community.

​Ultimately, Patti’s dream is a community designed specifically for adults with autism where Jordan can thrive. “What I want for him is a purposeful, meaningful life where he can live with his peers, yet still get the supervision that he needs.”