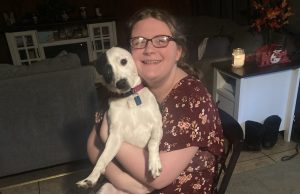 Mental illness is becoming increasingly common in youth in the United States. Without the proper treatment and support, mental health issues can escalate and have severe negative impacts on the child’s life, which is often the case for youth who don’t have a support system in place. Fortunately, there are caring people like Kim M. who are willing to take in youth with mental health issues and help them get the services and support they need.

As a toddler, Sarah began showing signs of severe mental health issues. Often times, Sarah felt confused, annoyed, short tempered and disoriented. When experiencing these episodes, she would act out in unpredictable and violent ways. Living in a home with inadequate parental support, Sarah felt disconnected from her mother and much of her anger and aggression was directed at her. Eventually, it was clear that Sarah’s mom could not care for her. Over the years, Sarah was placed in numerous treatment facilities, psychiatric hospitals, foster homes, and residential facilities due to her behavior—each of them giving up on her.

Eventually in 2018, Sarah was placed with Kim. As a Treatment Parent with Pressley Ridge, Kim has received advanced training to work directly with youth like Sarah on changing behaviors and building new skills. For 11 years, Kim has opened her home to help children with chronic mental health and behavioral issues.

When she first came to live with Kim, Sarah’s behavior was very erratic. She had episodes in which she would go into a rage slamming her bedroom door repeatedly trying to break it. Kim responded by removing the door to let Sarah know that this type of behavior would not be tolerated. Sarah suffered from extreme mood swings and anxiety. She also had low impulse control and often became so agitated and enraged that she would destroy furniture and Kim’s personal property. During these episodes, Kim emphasized to her that all she was doing was breaking “things.” Kim cared more for Sarah than the items she destroyed.

“It wasn’t easy. It was really hard and, at times, extremely frustrating,” said Kim. “Sarah was used to her bad behavior resulting in a move. So, I chose to show her that no matter what she did, I would care for her and keep her safe. She was used to being locked behind doors when she was out of control, but instead I removed the door showing her my home was still open to her.”

Kim used the training she received from Pressley Ridge to gain Sarah’s trust and support her emotional needs. When Kim learned how much Sarah loved to read, she began using books as a tool to reward good behavior. When Sarah did something wrong or started falling back into bad habits, she would lose the privilege of getting a new book.

As Kim continued working with Sarah, the extreme episodes became less frequent. Kim was determined to show Sarah that she was in a different place now—a place where someone cared about her and would not give up on her, no matter what.

Erin Kovak is the Pressley Ridge Therapist/Treatment Coordinator who was assigned to work with Sarah. “It was wonderful to see that Kim was the first person in Sarah’s life who was dedicated and willing to work through the difficult behavior and episodes that Sarah exhibited,” said Erin. “Kim made it a point to show Sarah that she was in a place where her old tactics weren’t going to work.”

Scott Roberts, a licensed psychologist who has been working with Sarah for many years, is amazed at the progress Sarah has made during her time with Kim. “Sarah has struggled most of her life, and Kim was the perfect person to help Sarah progress. Over the years, Sarah became very successful at getting moved around when things became uncomfortable. Kim never gave her the message that she did not want to care for her,” Scott said. “Sarah’s success was truly from being at Kim’s house. Her approach was what Sarah needed. Showing her, she was there for her, no matter what. That approach does not work for every kid, but it certainly worked for Sarah.”

It wasn’t an easy road, but Kim remained steadfast in her dedication to Sarah. For the first time in her life, Sarah did not have to be hospitalized during the three years she has spent with Kim. Sarah recently turned 18, which marks her entry into adulthood and a new chapter in her journey. She is learning self-regulation and remains in Kim’s home as she prepares to transition into adult services. A plan is in place for her to get a job and, hopefully, one day live on her own. Finally, there is hope on the horizon for Sarah.

Pressley Ridge is nationally renowned for their Treatment Foster Care program, which places more than 1,800 youth with certified parents each year. In contrast to traditional foster care, treatment foster care places youth in a more structured home environment with treatment parents who have received advanced specialized training. Pressley Ridge’s evidence-based pre-service training is centered on the importance of a strong relationship between the treatment parent and youth. Treatment parents are trained to support the child’s emotional and developmental needs and to provide the care, skills, and supervision to help them overcome their difficult experiences.

Across the nation, the need for foster parents continues to increase. In the six states served by Pressley Ridge, the need for specialized treatment parents like Kim is even greater due to the complex needs of the youth.

“Our treatment parents are truly selfless and caring people who dedicate their lives to supporting children who have experienced trauma and other challenges,” said Susanne Cole, Pressley Ridge President and CEO. “Now more than ever, children in our communities need a stable adult to care for them and help them learn to live more effective and fulfilling lives.”

Find out more information about becoming a Treatment Foster Parent through Pressley Ridge.